I am thrilled to death to be part of Laura Diamond's cover reveal for her new YA book, Endure. No, you don't understand. I got to beta a *much* earlier version of this book, and I was in love. So the fact that it's coming out soon has me flailing. Laura is an extremely talented author, and I think Endure is going to be her best release yet. Please check out the info, preorder if it's available (and if not, mark your calendars for July 12!), and support this talented lady! 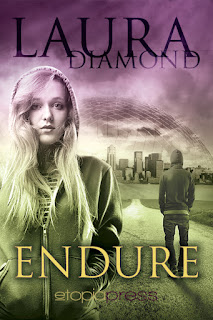 Seventeen-year-old Justin's anemic blood is a blessing. Or a curse. It all depends on who you ask.

To most of the immortal Vie, his blood is a scourge: untouchable and useless. To some Vie, his blood is a drug. To Justin, it’s something that gets him in a lot of trouble. Being poisoned by a Vie is just one example. His sister getting kidnapped is another. Whether it’s being coerced by a deluded cult leader, or negotiating with Alex—an Vie scientist addicted to Anemie blood—Justin struggles to keep every mutated drop of blood he’s got.

His fight for survival gets more complicated when he meets Alex’s slave, Cara. Despite coming from different worlds, they’re both prisoners, at risk of being drained by a hungry Vie any moment. When she risks her own neck to help Justin find his sister, he's left with a terrifying choice.

Saving what's left of humanity.
Saving his sister. Saving the girl he loves.
Or sticking a stake in Alex’s chest.
Justin can't decide which option will get him killed first.

Laura Diamond is a board certified psychiatrist and author of all things young adult paranormal, dystopian, and horror. Her Young Adult Paranormal Romance novelette, NEW PRIDE, and novel, SHIFTING PRIDE, debuted late 2012 from Etopia Press. A spin off short story based on the lions of Tsavo, TSAVO PRIDE, is now available on Amazon. Forthcoming novels include EVOKE, Book Two in the ENDURE series, from Etopia Press, and a Young Adult Paranormal Romance, ZODIAC COLLECTOR, from Spencer Hill Press. When she's not writing, she is working at the hospital, blogging at Author Laura Diamond--Lucid Dreamer and renovating her 225+ year old fixer-upper mansion.

Find Laura Diamond on the web:

that does sound good!